It is often said, that it is impossible to decide upon the superiority between different works of performing arts. But it is also true that all artists constantly struggle to “better” their work. Undeniably, there is a form of competition on a global level.
If that is the case, what must we do in order to enrichen performing arts all over the world?
What is needed for Asian artists to thrive internationally?
What immediately comes to mind is to create a new “scale” to measure the quality of performing arts!
This has to be it. To think about what makes a “superior work of art”.
The “World Competition” is an opportunity for artists and audience to gather and consider this problem together.

WHAT IS "Tokyo Festival World Competition 2019" ?

In the Tokyo Festival World Competition 2019, six groups, one each from the five regions of Asia, Oceania, Europe, Africa, America, and another from Japan, will gather and present their works in one week, beginning from October 29th, to November 4th.

Currently, the world of performing arts operates under genres such as “theatre”, “dance”, “opera”… frameworks created in modern Europe. But within a climate where globalization has transformed the flow of information, people, and goods, and Asia is once again becoming the center of world economics, this framework calls for re-examination.

This project brings together artists who have different backgrounds and values, and through competition, aims to create a dialogue that examines the future of performing arts.

The 6 participants in this year’s competition are upcoming artists bound to lead the world of performing arts in the 2030’s, selected by producers who curate international performing arts festival programs in each region, such as Kim Seong-Hee, the first artistic director of Gwangju Biennale, and Agnès Troly, program director of Avignon Theatre Festival. The 6 producers who recommended the participants will state their reason of recommendation based on the situation of each locality, on October 29th(Tue), the first day of the program. Discourse through 6 works that come from different social backgrounds, different values will provide a new perspective of viewing performing arts.

On November 4th(Mon), the final day, an awarding ceremony will take place. The awards presented in this project will fall into 3 categories. Lead by Juliette Binoche, the Chairperson of the Jury, the “Artists’ Review Award” will be decided by 6 artists from the each area, who work internationally. The “Critics’ Review Award” will be selected by 6 Japanese speaking critics who have deep understanding of each area’s performing arts. The discussion by critics of a diverse background will definitely be one that enrichens the “critical language for Japanese speakers”. Individual reviews by the critics are to be published after the competition. And also The Tokyo Festival World Competition invites the audience members attending each performance to participate in the creation of new values through voting for the “Audience Award”. Ballots will be handed out at each venue, and the audience will be asked to fill out their evaluation of each work of art. Each audience members’ votes and reviews, every applause and gaze are bound to cultivate the values of performing arts of the next generation.

In addition to the performances, various occasions will be prepared to discuss the individual artworks, such as talk events by each locality’s recommender, introducing the artists’ works to the audience.

Join us in the The Tokyo Festival World Competition 2019, where artists and audience to come together to create new values of performing arts. 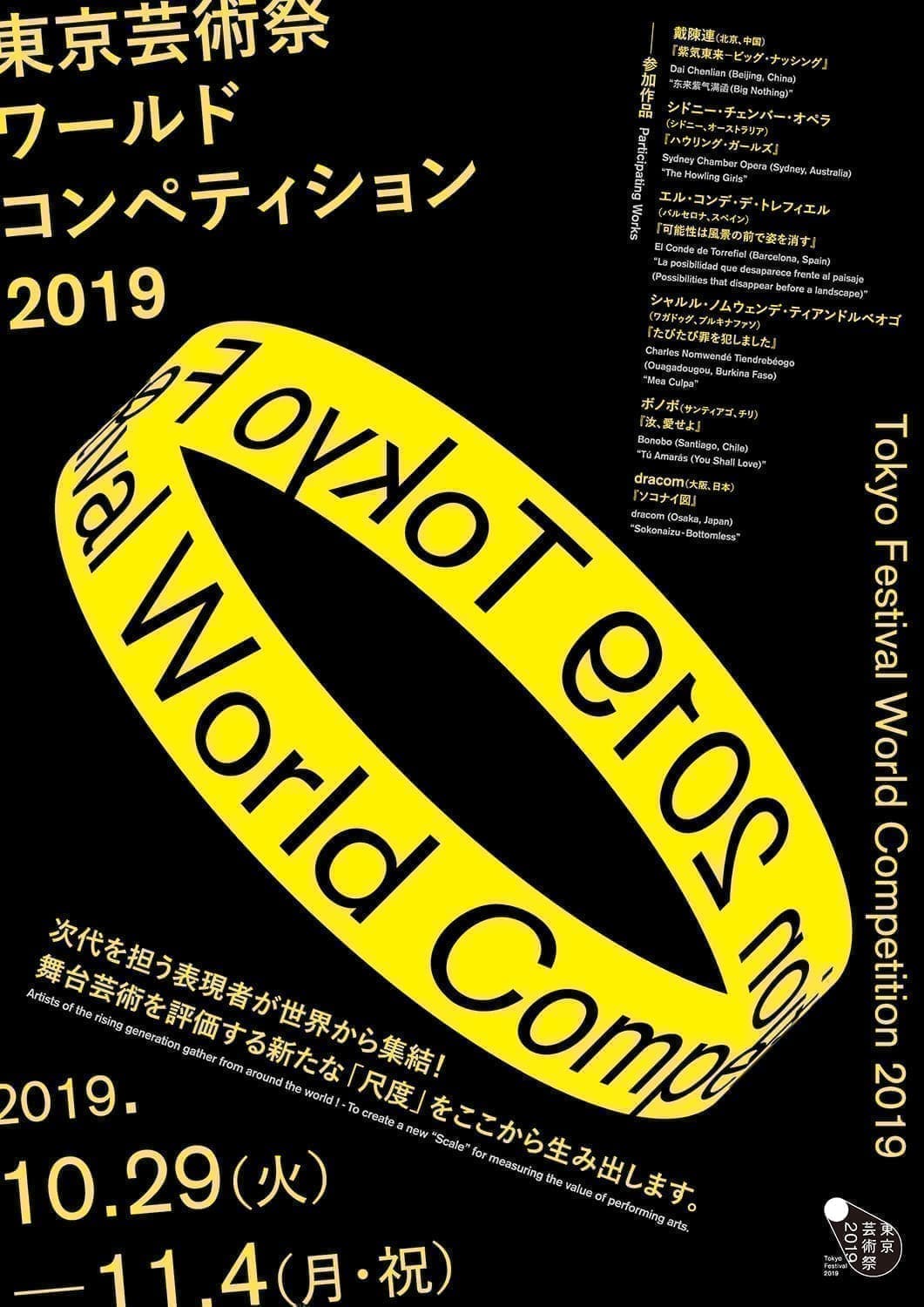 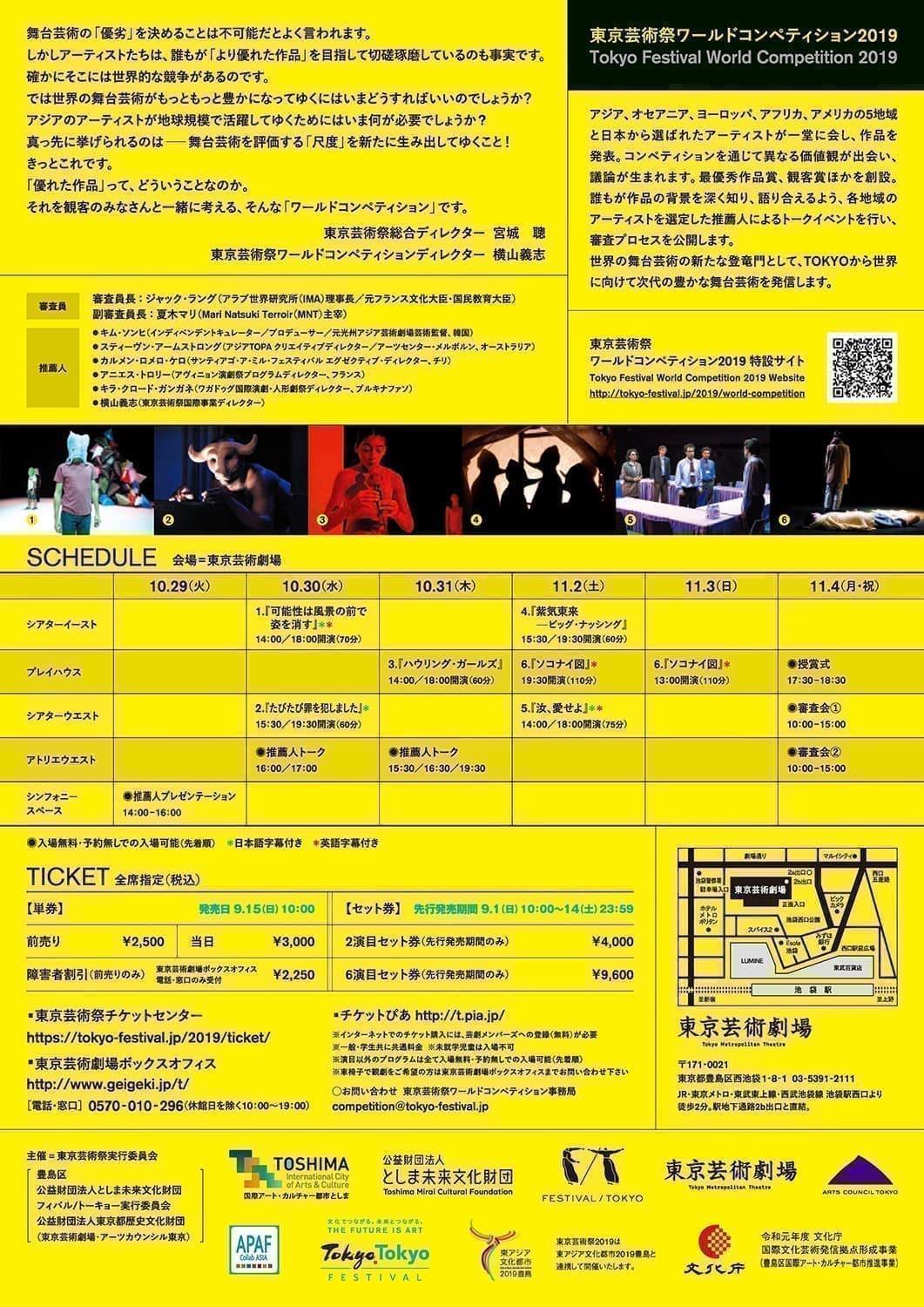